I created this sword maybe 12 years ago for a minotaur PC, who was a member of the party for which I was DMing. The party was around level 10 (2nd edition rules), and travelled beyond the world of Krynn.

This party was basically a bunch of good guys, who fought evil with remarkable savagery. I decided to use the Ravenloft setting, so I added the Domain of Dread to my own Dragonlance setting. The wizard in the party was a Red Robe with few scruples, which made him susceptible to the influence of the dark powers of Ravenloft.

I needed a character who could pull the party in the direction of good, and as it turned out, the player, who played the minotaur agreed to provide this counterbalance. In order to empower him, and send him on a epic quest, I created the sword Icingdeath.

I stole the name from Forgotten Realms, as it is the name of a white dragon killed by Drizzt Do’Urden. I include the only write up of the sword I could find on laptop. I seem to remember there was a richer back story to the weapon, but unfortunately I cannot find it. I haven’t updated the weapon to 3rd or 4th edition rules either. I don’t have the 4th edition rules, and since my gaming days are long gone, I didn’t see any reason for me to update to 3.5 either.

I hope somebody will find this interesting and maybe update the stats. I’d be more than happy to post the stats on the blog, so if feel free to email me should you decide to update my sword. Email me at dragonlance (at) gigaboot (dot) dk

Used by: Fighters, The white minotaur.

Description: This sword looks like a normal clabbard, except it glows with a faint white light when drawn.

Powers: Being a Frost Brand Icingdeath has the following natual powers:

Secrets: Icingdeath is an intelligent sword and has the following additional powers:

Defenses: Icingdeath chooses its own user and thus does not permit any lesser fighter to wield it. The unfortunate one is subject to a cold shock doing 2d12 points of damage. 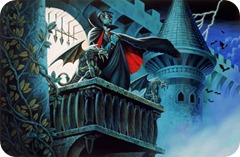 So, this is not exactly an adventure hook, but rather a little story about how we included Ravenloft in our Dragonlance setting back in the good old days. Hopefully, somebody can find some inspiration from this post, or at least be a little entertained.

The whole story started with the Tower of High Sorcery of Istar. In our campaign the tower was transported to the demi plane of dread, Ravenloft, shortly before the Cataclysm struck Istar. My DM got the story hook from one of the Dragonlance comic books. 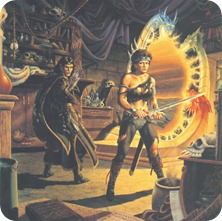 My black robed wizard found out that the tower wasn’t destroyed in Cataclysm, and after many dangerous adventures, he was able to locate it in Ravenloft. Hen entered the tower, and basically had to pass his Test of High Sorcery again. Long story short, he passed the Test and became the Master of the Tower.

The Tower still included the original portal to the Abyss, but since the Tower was located on a different plane, and since there was no white robed cleric around, the Portal opened up in Scull Cap back on Krynn. This little nifty trick allowed us to run a campaign that spanned across the Dragonlance and the Ravenloft setting.

Shortly after I more-or-less retired my character since he had attained level 23 or something like that. The character was used as a high level NPC, who could help the party travel between planes.