I just finished reading The Lost Chronicles, and as usual I thoroughly enjoyed the series. True to form, I know wish Wizards still published Dragonlance books, and what if the published The Lost Legends? It would be a great way to begin a new era of novels by leveraging the old strengths of the series.

What would that series be about? Well, here’s my take

In all honesty, this idea might actually not be the best thing to do if one was to publish more novels. After the 5th age split the fan base, the last couple of books published, started to move the setting forward, and that might be the best way to create something sustainable,.

Last night I watched the latest episode of Game of Thrones. For some odd reason I haven’t been watching this show, but my wife has, and she suggested we watch the last season together. So basically, I have skipped the entire book and have jumped right to the last page.

In last night’s episode, there was a dragon battle, which of course made med think of Dragonlance. I know, obvious. There has been a lot of talk in the Facebook group about an upcoming live action rendition of Dragonlance, which a lot of people seem to be interested in. Given the success of Lord of the Rings and Game of Thrones it might be an obvious choice to adapt Dragonlance for the small or big screen.

To be honest, I think I would rather have the book line resurrected. There are so many interesting things that could be done with Krynn in terms of gaming and novels that I think it would be a shame to not do this. There’s probably not a lot of money to be made from that though, so maybe an adaptation would make the most sense.

As far as I can tell, the creators of Game of Thrones have worked closely with George R. R. Martin in order to keep the show as close to the books as possible. If the Dragonlance Chronicles were to be adapted for TV, I think it would require a thorough change in order to make it more relevant for the current times. I still love the Chronicles, but there are not the best written books by Weis and Hickman. However, if the two original creators were heavily involved, I have no doubt they could recreate the Dragonlance feel in more modern and mature context. Unless of course they want to make it a kids’ show.

The beautiful thing about taking the Chronicles to the small screen is that in case of a success, you have the sequel ready to go with the Legends books. Imagine what the battle between Raistlin and Fistandantilus would look like using today’s technology. Or the dragonarmies arriving at Neraka.

Even though Joe Manganiello is allegedly floating a script, there are so far no signs of a resurrected Dragonlance.

I have been reading The Messenger this weekend. Well, I have read two chapters that is. Between three children and a new kitchen project that was about what I had the time for. That, however, is not necessarily a bad thing. This way the series will last longer.

There’s not much to say about it yet though. It is set in Icewall, which I think it really great and makes for an interesting setting. And then it’s written by Chries Pierson who is one of my favorite Dragonlance authors. So, if you are still feel that Dragonlance itch and have not read this trilogy yet, so far, I can recommend it. Oh yeah, it is still on Amazon.

Two weeks ago I finished the final novel in the Elven Exiles trilogy and let me tell you that was some of that good stuff.

I never fully understood why the elves always were the victims considering their vast power and knowledge. However, especially the War of Souls totally kills everything we had come to associate with the elves. There, I think it’s really nice to see them find their new homeland and rebuild their nation in a meaningful way. Again, I can only cry about the fact that Dragonlance novels are a thing of the past as I think there are tons of good story hooks here. At least we have Star Wars

In my quest to collect all three books in the Elven Exiles trilogy I have so gotten my sticky hands on volume 2 and 3. Volume 1, Sanctuary, has up until now eluded me, as Amazon have not been able to acquire it anywhere. Luckily I found another seller on Amazon, and it looks like I will receive the book during my summer vacation. 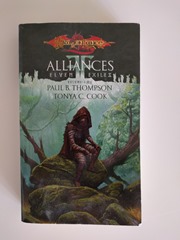 The Dragonlance Canticle inspired me to read the Elven Exiles trilogy. Since this is out of print it is really difficult to get this series, however, that will not stop me from trying.

Today I received the second book in the series, so I can’t start reading just yet. Good thing I am still  reading the Taladas trilogy. 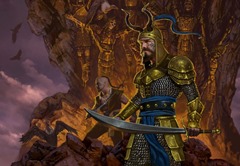 One of the really sad things about the death of Dragonlance in my opinion, is the fact that wew ill never see any real meaningful development of the continent of Talads. I have started reading Chris Pierson’s excellent trilogy, and the more I read the more I want to explore this continent.

I was never a bg fan of the Time of the Dragon boxed set, simply because it lacked some of the details I was interested in at the time. Especially NPC stats, organizations, cities etc. were never really fleshed out to the extent that I wanted to see. Now that all my game material is packed away I cannot revisit this set, but I wonder if I would see it differently today.

Adding insult to injury, I believe that Margaret Weis and her good people were working on a Taladas sourcebook when Wizards cancelled the licensing deal. Given the quality of the material Weis et al. released, I can only fantasize about what they could have accomplished with a Taladas sourcebook. 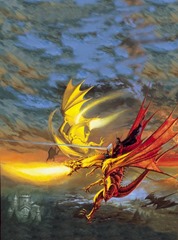 Having finished some of the “newer” Dragonlance novels, I have decided to return to one of the classics, The Legend of Huma. In the past I have always read this novel after Chronicles and Legends, but this time around I am avoiding the two original trilogies in order to focus on the “peripheral” stories. I have always found Richard A. Knaak to be one of the best Dragonlance writers and this one is in my opinion of the best ever written. I mean think about the characters: Huma, Magius, Kaz, Crynus and of course the renegade mastermage Galan Dracos. Furthermore we meet some ultimate dragons like Charr and Wyrmfather not to mention a young Cyan Bloodbane What’s not to like?

From a gaming perspective there’s a ton of material that can be turned into some really exciting content. Unfortunately no one ever did. So be it. We still have a really good novel, which I have read several times and probably will read several more times.