In the wake of the War of the Lance a group of people formed an unholy alliance, which was supposed to turn them into the most powerful force in Ansalon. Their tools were deceit, treachery and murder; and their willingness to commit the foulest deeds. Among these were renegade ogres, draconians and even a dragon or two. Other than that many wicked humans flocked to the group’s condor banner.

The groups, or Hierarchs as they call themselves, are not surprisingly followers of the dark god of vengeance Sargonnas. The Hierarchs are attempting to establish a powerbase in Ansalon and they have chosen the ancient city of Shrentek as their main city. With lightning speed and incredible precision, the Hierarchs’ forces were able to defeat the original inhabitants and take over the city and the surrounding areas. The people that were not killed were used as slaves and they were promptly put to work rebuilding the city in honor of Sargonnas. 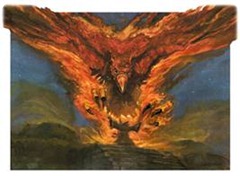 Through the hard work of the slaves and the aid of their dark god’s infernal servants, the city was constructed in a matter of months. The Hierarchs solidified their grasp on the area, while maintaining a high degree of secrecy. They are still a rather unknown force, but whispers about them are slowly spreading across the Eastern part of Ansalon. The Silvanesti elves are concerned about an evil power so close to their borders, and are preparing for war.

For the time being, the Hierarchs do not posses the military might to challenge the regions of Khur, Blöde and Silvanesti, which is why they use spies to infiltrate and gather vital information. These spies are spread out all over the Eastern seaboard, providing the Hierarchs with an accurate rendition of the political climate.

The Hierarchs are currently considering a new foe – The Cabal. Gil-Galad has made his home in the area coveted by the Hierarchs, which has caused the two to clash on occasion. Currently, the conflict is not yet violent in nature; however, the future does seem rather unstable. If the Hierarchs decide to go up against the combined might of the Cabal, the region will surely experience destruction and death. Unbeknownst to the Hierarchs, the Cabal is reluctant to enter into an open conflict, because a lot of resources are gathered in Daltigoth.

The biggest obstacle to the plans of the Hierarchs is the tribes of Khur. In terms of military might a united Khur would almost certainly be able to repel any attacking force, given their knowledge of the treacherous lands of the region. Unfortunately, the tribes have a lot of internal rivalry, which prevent them from uniting behind one cause or leader. The Hierarchs are aware of this situation, and they attempt to fan the flames by attacking certain tribes making it look like the work of their enemies. Furthermore, the Hierarchs try to form alliances with some of the tribes that are willing to join the ranks of the Condor. However, since only a fool would trust the Hierarchs, the alliances are shaky at best. Moreover, the Hierarchs have managed to pace spies in many tribes, which give them a lot of information regarding the in fight that takes place. The spies have attained different ranks throughout Khur, ranging from common foot soldier to trusted advisor of the Zulkirs. Evidently, the Hierarchs are a major influence in the region, albeit a hidden one. The Hierarchs’ main goal is to dispose of the Khan who is currently the closest thing Khur has to a regent.