The arcane library of Tarsis is actually two buildings. It consists of a tower, which is inhabited by Norrin Cahill (w18) and the library itself. Both buildings are made of white marble and are covered with golden runes of power and protection. The buildings are also crowned with golden domes that sparkle in the sunlight. The compound is surrounded by a huge stonewall, which has a single silver wrought gate. Inside the inside the wall any visitor is greeted by a beautiful garden with small streams and ponds as well as many different fruit trees. Sets of double doors are the only entrance to the library. The tower has no visible entrance. The city guard of Tarsis patrols the walls.

The tower of the white mage

As mentioned before, the tower is the dwelling of the white robed wizard Norrin Cahill. He is the creator and overseer of the library, as well as a valued advisor to the city rulers. The tower contains his most valuable possessions as well as a personal library and laboratory where he conducts his arcane experiments. The tower is also a meeting ground for the Cabal when Norrin hosts the meetings. The tower is protected by many powerful enchantments and anyone who wishes to enter must have a special permission to do so.

The lower levels of the tower are reserved for the apprentices and henchmen. These people have luxurious rooms of their own, which they can use freely. Norrin’s apprentices usually accompany him when he conducts his arcane research. His apprentices also work as Norrin’s messengers and can often be found in Tarsis. Norrin has three apprentices, all wizards of the white robes level 3-6. One of his apprentices is a female elf hailing from Qualinesti and she is in charge of communicating with the elven kingdom.

Norrin spends most of his time in his tower but he can also be found walking the enormous halls of the library.

The library consists of five different buildings connected via long halls. There are bookcases everywhere filled with old books and scrolls. This place has one of the highest concentrations of knowledge and information pertaining to Krynn. The second floor is reserved for small study cells where anyone seeking knowledge may study in peace. Scribes who spend their time working on new volumes or restoring old ones inhabit the third floor.

The library does not contain spell books but holds numerous volumes about almost every subject imaginable. The building is open day and night and often visitors can see mages of all colors pour through the tomes. There are also many non-mages who make use of the library’s facilities. 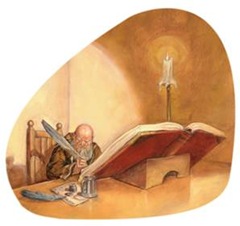 Studying in the Grand Library of Tarsis

There are two primary guardians of the library. Charged with the outside defenses is the Zhakar dwarf Dwaars whose plague Norrin cured. In return Dwaars was more than happy to be in charge of the outer defenses. Dwaars (fighter 9) has his own quarters in the library where he occasionally will spend a quiet evening. To outsiders Dwaars appears like the stereotypical dwarf. He takes his job very serious and will do whatever he feels necessary to carry out his tasks. He maintains a good relationship with the apprentices, albeit these relationships are rather superficial. His only real friend is the elf in charge of the interior of the library Tyslin-San with whom he spends many a quiet evening in their private quarters.

Tyslin-San is a male Silvanesti dark elf. He is a wizard of the black robes (wizard 8) who was banished from his homeland by the Silvanesti elders for practicing the dark arts. After winning his black robes Tyslin-San traveled Ansalon searching for a place to settle down. For many years he was on his own until he met the white robe Norrin Cahill who instantly recognized the elf’s talent. Norrin offered Tysli-San the position of caretaker of the grand library. Tyslin-San accepted and finally found a place to settle down for good. The elf spends most of his time in the library overseeing the defenses. He also spends time in the tower where he has his own quarters including a fully equipped laboratory where he can conduct his magical research. Tyslin-San is not very approachable and visitors will find him a difficult man to deal with. 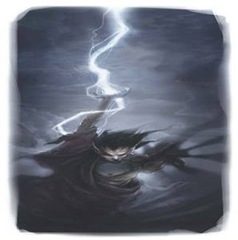 Tyslin-San of the Black Robes

The sage of Tarsis resides in the grand library where he has his own chambers. He showed up the day before the completion of the compound and was instantly welcomed and afforded his own quarters. The sage is obviously a powerful wizard of the white robes but no one seems to know him prior to his appearance at the library. His knowledge concerning the history of High Sorcery is immense and he displays an acute sense of detail. The sage appears to be an elderly yet vigorous man with almost silver looking hair and white robes. He enjoys stimulating conversation and can often be found roaming the great halls of the library at night.

Unbeknownst to anyone at the grand library, the sage is in fact an ancient silver dragon named Mercury. He is a very skilled magic user and historian, which is why he chose the library as his residence. He will not reveal his true nature unless another dragon attacks him. Mercury will defend the library using his spells if attacked; however, he will remain in his human form. Mercury has his own quarters where he conducts his experiments. He will gladly talk to anyone but he never invites people to his own quarters. He is known for spending the evening with Norrin discussing matters of wizardry and philosophy.

Unlike the Towers of High Sorcery, the Grand Library is not surrounded by a magical grove. Instead, the library is surrounded by a white wall with protective runes. Within the compound itself there are several streams and small waterfalls in which many water elementals are hidden. The elementals will rise out of the water and attack any intruder when so commanded by their master. Roaming the grounds is also a large number of air elementals who are virtually invisible. They patrol the skies above the compound and report directly to the dwarf Dwaars. 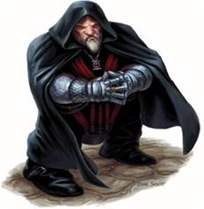 In the middle of the courtyard a fountain is situated. Unbeknownst to any except for the master and the guardians of the compound is that the fountain is a secret passage to the Watermere. Norrin has dealings with Forcasion Omidai, the Master of the White Robes (wizard 15) and they use this portal to travel to each other’s domains.

Guild of Wizardry in Tarsis

As could be expected, the Wizards of High Sorcery are not as powerful as they used to be. Guided by the three moon gods, Solinari, Lunitari and Nuitari the wizards have devised a strategy, which will restore the glory of their organization.

Nor surprisingly, the power of the wizards is concentrated in their towers. The Conclave does not currently command the power to build new towers, but in time they plan to erect a minimum of two towers; one in Daltigoth and one in the Khur area. Evidently these plans are in the future, which is why the Conclave has setup numerous mage guilds in most of the major ansalonian cities.

The buildings used by each guild varies from area to area, however, they are all magically fortified. The guild master is usually a senior mage level 13+ who has the responsibility of preserving the existence of the guild as well as recruiting new apprentices. The guild masters do not have a seat on the ruling conclave but most of the masters are considered next in line and are expected to step up when there is a vacancy.

In terms of knowledge, the guilds are nowhere as resourceful as the towers, but they do carry a large assortment of spells, which members can learn.

Some of the guilds have grown quite powerful and some of them are even beginning the preparation for construction of a new Tower of High Sorcery. One such example is the guild in Tarsis, which is one of the more powerful guilds in Ansalon. The reason why the guild in Tarsis has grown so strong is primarily due to the newly built Grand Library. The library has attracted many mages and its creator Norrin Cahill is an influential figure among the rulers of Tarsis. This has turned the guild into a fairly strong political force in the city.

The Tarsan guild is located a few blocks away from the Grand Library. The building is a multistory mansion surrounded by a large brick wall, which is patrolled day and night by armed guards. The building contains numerous laboratories and living quarters as well as a great meeting hall. The guild also contains a grand library, which has an impressive selection of spells. The library has attracted many mages from the south western part of Ansalon and Tarsis is slowly but steadily becoming a place where trade flourishes. The marketplace boasts of many shops that specialize in exotic ingredients needed for arcane spell casting. The city even has a Three Moon Shop located in the business district. Generally the businesses have prospered from the guild due to an increase in demand. The lords of the city are already dreaming of restoring Tarsis’ pre-cataclysmic greatness.