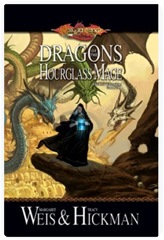 There has been at least one more cover floating around out there in cyberspace, but it turned out to be the wrong one. Margaret Weis confirms over on the DragonlanceForums that this is indeed the right cover.

I think it looks pretty damn cool. What do you guys think? 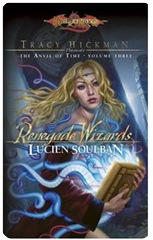 The Dragonlance writer with the coolest name, Lucien Soulban, will see his latest book hit the shelves next month. I never read any of his books, but the guys over at the DragonlanceForums seem to like him quite a bit.

He engages a lot with the community, so he has big plus in my book. Unfortunately it will probably take forever before the book is released here in little Denmark, so I will just have to wait. It seems like a really interesting plot, so I will definitely have to check it out once Renegade Wizards is released.

I have been looking for a preview chapter to link to, but to no avail. If anybody knows of such a chapter, please let me know.

So, I decided to create a Google Alert based on Dragonlance around the time I started this blog, which is about two weeks ago. I also created an alert for Greyhawk, but that just resulted in a lot golf stuff, which I am not really in to. Anyway, during the past two weeks I have received on alert about Dragonlance, and that was two postings about downloading e-books and one from CDon.com about audio books. That is pretty sad. I honestly expected more hits, since I figured we had a pretty active community. I guess I was wrong…or Google alerts just suck.

Hopefully that will change soon. There are so many guys out there doing really cool homebrew stuff I wish they would publish it online. Well, there’s always the Nexus.

I guess I managed to write one more blog post before abandoning this little Dragonlance project of mine. The following text is a collection of information about Fistandantilus that I have been able to find in various novels. One of the cool things about The Dark One is that his history is so obscure, so my take on him is by no means meant to be definitive history of Fistandantilus.

I expect to create a PDF version of this blog post at some point for your downloading pleasure.

The first time we hear about Fistandantilus is in Dragons of Autumn. Raistlin Majere finds one of his old spell books in Xak Tsaroth and at the same time establishes that Fistandantilus wore the Black Robes. Furthermore, it is established that he was the most powerful wizard in Krynn. 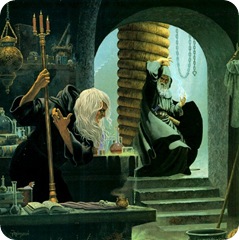 In Dragons of Winter Night, Fistandantilus talks through Raistlin Majere after the destruction of Tarsis. He recounts the creation of the Dragon Orbs, indicating that he was one of the creators. If this is indeed true, Fistandantilus was truly ancient. In order to participate in the creation of the Dragon Orbs, he would have had to be powerful, which means that he could not have been a young man at this point.

need for staves, familiars etc. he wore unadorned black robes with a hood, which only revealed his beard. An unnatural cold radiated from his body. Considering how many times Fistandantilus used the Bloodstone it is plausible to believe that he looks nothing like he used to. This same book describes a cave, which is guarded by a green dragon that leads to the Tower of High Sorcery in Wayreth. These tunnels are allegedly created by Fistandantilus. 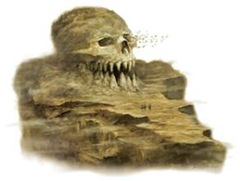 According to Fistandantilus Reborn, the wizard was able to take part of his life force and imbue a magic item with it. He gave this item to an apprentice, providing Fistandantilus with extra life insurance. Additionally, the skull, which rests beneath Skullcap, still contains the essence of the lich Fistandantilus. Allegedly, these two versions of the ancient mage battled each other resulting in the essence of Fistandantilus being scattered through the River of Time. 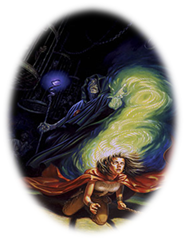 The Kingpriest trilogy recounts Fistandantilus’ role in the Lost Battles. Allegedly, he gave the Kingpriest the power to penetrate the magical groves surrounding the Towers of High Sorcery in order to weaken the Conclave, which would oppose his bid for godhood. Furthermore, Fistandantilus carved out a laboratory for himself underneath the temple of the Kingpriest. The protective spells laid on this place were so powerful that they were able to withstand the destruction wrought by the Cataclysm.

In Legends, Astinus reveals that Fistandantilus wanted to enter the Abyss to battle the Queen of Darkness. In order to open the portal to the Abyss, Fistandantilus needed a priest of Paladine. Evidently he chose Denubis who was a priest in the holy temple in Istar. When Raistlin Majere became Fistandantilus, he chose lady Crysania over Denubis. 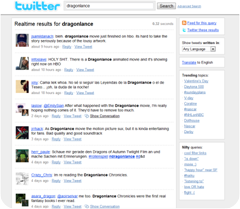 I just did a search on Twitter for Dragonlance, and let me tell you, it is not pretty. I suppose there’s no reason for thinking that there would be a lot tweets about Dragonlance but one can hope.

Considering all the social software tools out there, I find it a bit odd that all of the RPG communities I am aware of are still clinging to ye ol’ PHP forum application. I have no problems with forums as such, but maybe a Community Server installation would complement the forum?

Oh and another thing; how about getting Wizards of the Coast to let the community use the dragonlance.com nomain for e-mail purposes. It can be hosted for free via Hotmail or Gmail. What fanboy or fangirl wouldn’t love to have an @dragonlance.com e-mail adress.

Looks like our favorite Black Robed Wizard is scheduled to make yet another appearance. Personally I really want to read this novel, and I liked the other “Lost Chronicles” as well. Good stuff.

DRAGONS OF THE HOURGLASS MAGE SCHEDULED FOR SUMMER 2009

RENTON, Wash.—July 21, 2008 — Wizards of the Coast Inc., and New York Times Best-selling authors Margaret Weis and Tracy Hickman today announced that Dragons of the Hourglass Mage is scheduled for a Summer 2009 publication.

Dragons of the Hourglass Mage is the concluding novel in the Lost Chronicles trilogy by Weis and Hickman and features many of the most popular characters from their extensive line of Dragonlance® books.

Source: Wizards of the Coast

I know this is really old news, but I am tweaking the blog, and I needed to post something. Anyway, I hope this book will hit the shelves here in Denmark by the time I go on summer vacation.

I think this blog will be the place where I blog about one of my former favorite past times – Dragonlance. I have played D&D for around 26 years, and until about a year ago I play fairly regularly. I have played in different groups, although there has always been an inner circle in terms of membership.

Recently I formatted my computer, and I found a lot of old files, that I started years ago. These files were intended to be more-or-less a rewrite of the Dragonlance setting, making it fit my needs at the time. As these things tend to go though, my group slowly but steadily dissolved, and I was stuck with all this work that I could use for absolutely nothing. I just put these writings in a folder on my hard drive, and pretty much forgot about them. Until now that is.

So, to make a long story even longer, I hope that I will find time and through his blog, as well as the DragonlanceForums, reengage with the Dragonlance community, and hopefully finish writing and editing my take on the Dragonlance setting and publish it here.

Don’t expect a lot of updates, as I do have a “normal” life, with children and a stressful job in the IT industry, but check back once in a while or subscribe to the RSS feed. Heck, you can even feel free to leave a comment if you’d like.